I've been posting the high-end items that are rare estate sale finds.  In this post, I'd like to focus on every-day items that anyone can find at flea markets, yard sales, or even in their own closet.   Many "mundane" items are often marked for Goodwill donation or tossed in the rubbish bin (a big no-no).  But it's very smart and financially responsible to do a bit of research to determine what kinds of treasures you have. 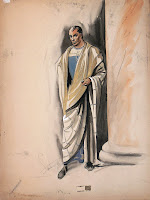 During a recent yard sale excursion, I found four signed costume watercolor and ink drawings marked for $4.  The drawing, signed by "Santiago," each measured approximately 15" x 20". None of the drawings were identified, but after a bit of online research, I discovered that the drawings - by Emile Santiago - were from the 1950 motion picture, THE ROBE, starring Jean Simmons, Richard Burton and Victor Mature.   Unfortunately, these wardrobe drawings were for secondary actors, but they nonetheless sold for $50 to $85 each (if I had found drawings for the principal actors for this film, the price could have gone as high as $500 each). In the coming weeks, I will be posting more cheap yard sale  finds, and suggestions of what buyers should look for, and in the case of sellers, what not to throw away.   Keep checking back with our blog

Another goodie we pulled from a pile of to-be-donated clothes was a vintage 1960's H Bar C embroidered western shirt.   It was in excellent condition and subsequently sold online for $275.   Apparently, any vintage western clothing with a label from H Bar C or Nudies brings big bucks, not only in America, but all over the world.  The new proud owner of the shirt lives in Paris (not Texas), France.   C'est bon y'all....

If you have a hard time finding good yard sales, you probably need a good map.  However, in the case of the maps pictured here, they were found in a dusty box of miscellaneous papers.  I bought the maps for whopping $3.  These twelve maps from the Automobile Club of Southern California, were road routes from various parts of California circa 1915-1920.  Vintage maps usually bring good money, but only if they are of desired locations such as major urban American cities. These maps sold online for approximately $150. 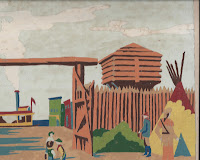 Finally, how about paint by number artwork.  You may not realize that this kind of kitschy artwork brings some good money, especially those of animals or unique places.  In my own yard sale trek, I found three vintage Disneyland scene paintings from the early 1960's which were marked for 25-cents each.   Had these cardboard canvases been unpainted, in their original box, they would sell for between $50 and $75.  In their current condition, they may be work $7 to $10 each.  Not big money, (and certainly not in the Monet league), but well above the change I plucked down for this artwork.

BBC Documentary Casting Light On the World of Art Appraising

Just saw a very fascinating BBC documentary show last week that detailed the process for authentication of a supposed Monet painting entitled Bords de la Seine à Argenteuil. The owner of this painting had been trying to authenticate this painting for almost two decades.  Art expert Philip Mould attempted to navigate the murky and complex art establishment world and found that - at least in the case of presumed Monet artworks - one authority, in the form of the Parisian-based Wildenstein Institute, has a veritable world monopoly on Monet authentication.

During the course of the documentary, the filmmakers and art experts researched and pieced together historical records and conducted a barrage of tests to determine this painting's pedigree.  This concrete documentation was formally presented to the Wildenstein Institute in Paris [the institute which had previously denied the painting's authenticity on numerous occasions in the past].  Without reviewing the incontrovertible evidence of authenticity, and without explanation, the Institute again denied that this was a genuine Monet.  In effect, their denial of this work casts a pall of illegitimacy on this painting and locks it out of the art world market.

Since this documentary first aired in the UK in 2011, most world-renowned art experts have reviewed the documentation and have steadfastly affirmed that Bords de la Seine à Argenteuil is an authentic Monet.   The Wildenstein Institute however, is still unmoved.

Some art authorities believe that the Institute is hoping the painting eventually finds its way to the market, where they can pick it up at a low sum and do their own follow-up research, and then miraculously confirm its authenticity.  Others claim that if the Wildenstein Institute reverses its position after so many years of denying the painting's authenticity, this reversal will undermine its own prominence as the dominant authority in the art world.  Whatever the reason, the Institute has opened itself up to criticism and condemnation for what some claim is its pompous and arrogant attitude (what the Institute calls its "connoisseurship").  Yet, this one sole entity still wields supreme power in the art world when it comes to the authenticating the works of Monet.

This is a fascinating story, and I encourage all who are interested in art to research the internet on the Wildenstein Institute, and the patriarch founder of the Wildenstein dynasty, Daniel Wildenstein.
Posted by David B. at 2:30 AM No comments: